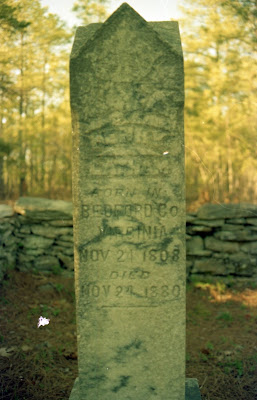 Either Henry Latham or one of his descendants thought it was important that visitors to his grave site at the Philadelphia Church Cemetery on Eaves Bridge Road in Haralson County, Georgia know exactly where he was born. This apparently was of more importance than checking to see if his birth date was correct.
Henry Latham never knew his father, who was also named Henry. Henry Latham, Sr. died in May, 1808, six months before his namesake was born. Henry Latham, Sr. owned a 171-acre plantation in Bedford County, Virginia. Twelve slaves (James Bobb, Horace, Nelly, and others) helped Henry and Mary Ball Lane Latham maintain the $1,394 estate, which included 15 hogs, 10 horses, 20 cows, 13 goats, 15 sheep, eight geese, and four hives of bees, along with acres of cotton and wheat.
Henry and Mary's three daughters and three sons lived in an expansive plantation home. An inventory taken at the time of the elder Henry Latham's death allows us to take a kind of virtual tour:


In the kitchen is a Dutch oven with which the slaves Nelly and Izbell cook dinner for the Lathams. Like most kitchens of today, there are pots and skillets, strainers and a sieve, pans and funnels, spoons and plates of various shapes and sizes, and a tea kettle. Since there is no running water, water basins and a wash tub are also kept in the kitchen. A coffee mill provides a freshly-ground jolt of caffeine, when needed. A grindstone is used to prepare spices and herbs. There are two butter pots here -- and the butter is fresh from the cow, as is the milk. Many of the dishes, basins, and plates are made of pewter. There is also a cotton wheel in the kitchen, with an iron spool, a tin cup, a pair of cotton cards, and a candle nearby, in case any work needs to be done after dark.
Moving into the main house, into the parlor, we find Henry's desk, on which a small library of books is kept. Browsing through the titles, one might guess that Henry is a religious man, perhaps even a preacher. (Henry is in fact the pastor at the nearby Difficult Creek Baptist Church. In 1806, Henry and John Garrett served as the church’s two delegates to the Virginia Strawberry Baptist Church Association in Bedford County.) Henry has a rather large, expensive copy of the Holy Bible in his possession, along with Hugh Blair's Sermons, Repon's Hymns, and John Gill's Prophesy of Isaiah. Also here are Henning's Justice, Jedidiah Morse's Universal Geography (in two volumes), Burham's Family Medicine, Nathan Bailey's Dictionarium Britannicum, William Paley's Philosophy of Religion, John Gill's Exposition of the Entire Bible, Bonnel's Enquiries, the Westminster Catechism, and a book on English grammar.
Above the corner cupboard hangs a shotgun. Six Windsor chairs and three "flag bottomed" chairs are on display. There's also a folding table here, perhaps for game-playing, reading, or sewing.
In the dining room is a square pine table, on which sit earthen plates and dishes, cups and saucers, salt shakers, a decanter, a pepper box, and a brass candlestick. Two expensive curtains hang over a nearby window.
Upstairs there are five beds for the parents and their children. In the parents' room is a trunk and a chest for clothing and personal belongings.
Out back are the slaves' quarters, with all the farm equipment, which includes hoes, mattocks, plows, shovels, scythes, wheat fans, etc. In the barn a wagon is kept, with four pairs of gear for the horses that pull it to town.
No public school system exists in these times. A man named Peter Nance provides this service to the Latham children, both the boys and the girls, for a fee. Other contractors employed by Henry Latham are s shoemaker named Deacon, a lawyer by the name of W. Clelland, and of course a doctor, George Cabell.

On February 20, 1808 Henry writes his last will and testament:

In the name of God, Amen - I, Henry Latham of the County of Bedford, being sick and weak of body but of sound mind and disposing memory (for which I thank God), and calling to mind the uncertainty of human life, and being desirous to dispose of all such worldly Estate as it hath pleased God to bless me with, do make this my last will and Testament in manner and form following to wit:
1st - I desire all my just Debts to be paid. I do lend unto my beloved wife Mary Ball Latham during her widowhood one-third part of the Lands whereon we now live; also one-third part of the Negroes, and the same proportion of my personal property, and further request that the provision laid into make a crop the present year be made use of in the manner intended; and all the Negroes to be continued together, and make crops if they can affect it with the aid of an overseer - these matters my wife and Executors will be more able to determine on after trial.
The tract of land whereon I now live I give to be equally divided between my three sons, Thomas, Silas, and Henry Latham, and their heirs forward. This division to be made after my son Thomas comes of age, and the third part of my land which I lend my wife during her widowhood shall be the (property) of my son Henry Latham, after my wife's enjoyment of the same.
My Negroes and personal property of all sorts I desire to be equally divided between my six children, Eleanor Latham, Caroline Latham, Thomas Latham, Silas Latham, Mary Latham, and Henry Latham - to them and their heirs forever. After my daughter Eleanor arrives to the age of eighteen years, and request of my wife, and executors hereafter mentioned to pay due attention to the welfare of my children, and have them educated in the manner that shall be deemed most essential for their future progress in life.
The third part left my wife on loan during her widowhood I wish her to enjoy in the manner already mentioned, and in addition to the same wish her to be privileged in taking which Negro man she pleases as part of her third of Negroes which she shall only possess as already mentioned, and all my household and kitchen furniture I lend her on the same conditions of widowhood, it being understood that whenever she marries she shall lose all interest and benefit in my property, real and personal, the same to be equally divided among my children herein before mentioned.
And lastly I do hereby constitute and appoint my beloved friend Jesse Cobb and William Leftwich (son of Col. William Leftwich) executors of this my last will and testament, hereby revoking all other or former wills or testaments by me here to you made, hoping and requesting they will qualify, begging them to take special care of my affectionate wife and much beloved children.
In witness whereof I have hereunto set and affixed my seal this 20th day of February in the year of our Lord 1808.

At a court held for Bedford County at the Courthouse the 22 of January 1816 this allotment of the Estate of Henry Latham was returned to court and ordered to be recorded.

McMinn County, Tennessee was organized from Cherokee Indian lands on Nov. 13, 1819. When he reached adulthood, Henry Latham, Jr. took his part of his father's inheritance and slaves and migrated there.
Find out what became of Henry Latham, his slaves, and their descendants in W. Jeff Bishop's novel, A Cold Coming, in February, 2013.
Posted by W. Jeff Bishop at 7:31 AM