How Do We Farm? 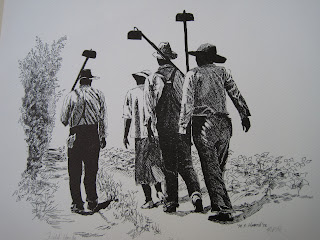 "How do we farm? Well, dey's sev'ul diff'unt ways. Dare is de cash rentuh, but we has always sharecropped, on a third and a four -- he furnish de house en de land en credicks you enough to live on, en den you settles at de end of de year. In de cotton we gives him a fourth, in de cawn he gits a third -- ...when you raise four bales of cotton de landlord gits one en you get three, and if you raise three wagonloads of cawn he gits de first one en you git the other two.
"Landlord's got a store on de place, en he 'low you so much a week on de books -- dey wuz four in my family and he didn' 'low us but a twenty-four-poun' sack of flouah, en a twenty-four-poun' sack of meal, en eight poun's of lard, en maybe a bar of soap. Ef you got molasses you didn't git no sugah, en ef you got bakin' powdah you didn' git no sody -- Meat? Whooo! We didn' git no meat, but we'd ketch a mess of fish now en den..."
--Walter Rowland, from Such As Us: Southern Voices of the Thirties, edited by Tom E. Terrill and Jerrold Hirsch, p. 55
Posted by W. Jeff Bishop at 1:28 PM