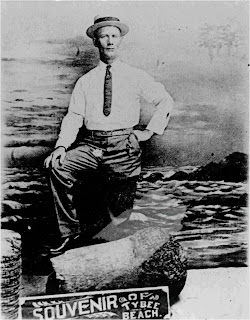 My Dad, Tom Latham, was a single-minded man, with an even temper. He was red-faced, a little short, thin guy. Weighed about 165. He was just like a cricket, though. Everything he did was just like snap, snap, snap! He was always in a hurry. And I don't believe he ever did finish a day's work. He planned his day and he never finished.
Like his brothers Henry and Edgar, he taught school. It was a little one-room school. And I can remember the first day I went to school. My mother didn't let me go that morning when the school first started. A little later in the morning, she brought me up there, dressed in little rompers, red and white striped with a little jacket, and she told me to go up to the door and say, "Mr. Latham, do you need a new student?" There I went, just like Mama said. I think the whole school just roared when they realized I was standing there.
He'd start the classes with this little bell he had. And he'd ring it when the classes was over, when it was time for lunch. He'd just pick up the bell, "Ding-a-ling!" Time for class to come back in. He'd usually take the bell and step to the door, because everyone was on the playground playing. He'd ring it several times.
He taught everything from primary to the ninth grade. I was in a class with Roy Lee McClung, P.J. Dalton, Odell Stubblefield, Clarence Sloman, Tailey Goldman, Little John Eaves, Russel Carter, Troy Summerfield, and plenty of others. They went to school the same time I did, but they had all different grades in the same room.
He'd have this class of geography to come up to the front benches, and he'd lecture them or he'd quiz them to find out how they studied their lesson. He'd let them back to their seats, then he'd call up the math class up to the front row. He'd lecture them and let them go back. When he called us up, he had a little box. He'd sit down right in front of us, on that little box. "All right, T.J., come right over here now. Let's see," he'd say as he'd turn the pages in that little primer. "Suppose you read this to me right here?"
In spelling, we'd all line up in a line, right up against the blackboard. He'd give out the words as he'd go down the line. And if this guy missed it then the next guy had a chance. He'd come on down, down the line. And if some of them missed all the words, if they couldn't spell anything, he'd have them go over and sit at the end of the bench at the side of the room. And he'd take that primer and he'd show them the words and he'd sound the letters to them. I remember he did that with me, when I first started.
I think he treated everyone alike. He wasn't any stricter on me or my sister Eloise than he was on anybody else in the class.
But in teaching school, I noticed this about him. Albert and John Previtt went to school to him. And Albert Previtt was hare-lipped. And of course, you know, somebody would talk to Albert and try to get him to talk back. And he couldn't whisper. He had to talk pretty loud, you know, because of that hare-lip. My Daddy was at the blackboard with some of his students. I think he was working math or something or other. And somebody said something to Albert, and Albert answered him. And Dad said, "Albert Previtt, come to the front!" Albert got up and went up there. Said, "Albert, you know you're not supposed to whisper when you're in school."
Albert said, "How did you know I was whispering?" Dad said, "Don't you know I got eyes in the back of my head?" I'll never forget that. I was just a kid. I believed him.
--T.J. Latham
Posted by W. Jeff Bishop at 11:56 AM