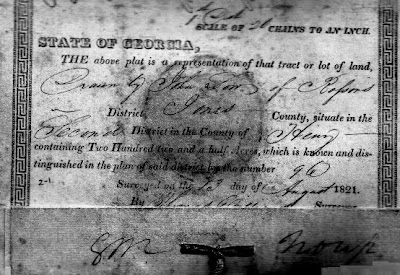 "My great-grandfather, Henry Latham, carried his Negro slave with him and they rode horseback, just following the river from Latham Town, McMinn County, Tennessee. This was in the summertime, probably after the crops had come in, because they were farmers. They went downriver and they found this little knob just south of the river, about 150 yards south of the river, up on a little clay hill, near Buchanan, Georgia. And well, 'Boy, that’s a nice place to build a house.' And they started inquiring to see who it belonged to. And I don’t think they bought it that day. I don’t believe he made the deal for it. I believe he found out who it was that owned it, then later on he came back down there and the deal was done, transacted in Buchanan, and the deed was written in longhand.
"My great-grandfather traded a pocketknife for the land to white Charlie Summerville. They had a white Charlie Summerville and a black Charlie Summerville, and a red Charlie Summerville, and all three of them were from the same family. White Summerville owned I don’t know how much property up and down the river. Just all kinds of property up and down the river. It was 'one pocket knife for such-and-such a lot number in such and such a district in Haralson County, Georgia.' At that time the deed had to come from the state capital of Georgia. It had to be I guess recorded at the state capital. Had a little round beeswax plaque, just about the size of a fruit jar lid. Had a blue ribbon on it that said state of Georgia, Department of Real Estate, or state, farm land, or something. It denoted what it was for. Then you turned the page over and it entertained to whom it may concern, I think would be the way it started, 'On this day, at such-and-such a time on such-and-such a year, Henry Latham gave one pocket knife and other important properties in exchange for one 40 acre tract of land in such and such a district, land lot number so and so.' And that was the deed. And we had it. And we had it in the original envelope that it was mailed to him, and Dad had it in his trunk, and I don’t think it was ever touched in all the years I can remember. So he and that colored guy cut logs and built that log house and I suppose the next year was when they moved down there. And this deed was dated in 1832.
"I have a clipping from the Haralson County Tribune, when it was printed there in Buchanan. And I think that was back in possibly ‘34 or ‘35, that told about my father’s obtaining that property where we lived. Now the lady that he got it from was a cousin of his. White. Mrs. White. He bought seven-and-a-half acres from Mr. John Cason to make the road the line. And in the Haralson County Tribune the write-up was that Tom Latham bought 88 acres of land from John Cason. Well he didn’t. Grandfather Latham, John Tazwell Latham, gave my dad 80 acres, which was two lots. And he bought seven-and-a-half acres from John Cason. Well, I tried to find out who it was that gave them that information. And I talked to the editor of the Buchanan Tribune about it. He didn’t even remember who it was that gave him that information. And I thought well could it have been one of my relatives. Uncle Victor’s kids, or Uncle Henry’s, either Effie May, Hoke, or maybe Aunt Beatrice? Naw, I don’t think it was none of them. I really don’t think it was any member of the Latham family. And that was the end of it. But they never printed a correction of that report that was in the Haralson Co. Tribune. I clipped it out and I was going to give it to my sister Eloise, but Eloise had got the same paper and she had cut it out, too. And she knew better. She told her girls that that was not right, that she knew where the land came from."
--T.J. Latham