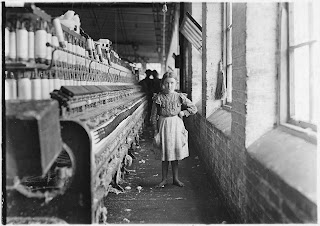 "Cotton mills were the largest things plain folk had ever seen. Full of strange, roaring machines crowded into vast rooms, they made more noise than folk had ever heard, and more commotion, too. The first impression they created could be awesome, even overwhelming...
"The vast majority of mill folks came directly from the farm ... All were poor ... most, especially the men, would have remained on the farm had the choice been entirely free." -- I.A. Newby, Plain Folk in the New South: Social Change and Cultural Persistence 1880-1915, pp. 25-26
Posted by W. Jeff Bishop at 2:05 PM