'Sores All Over His Legs' 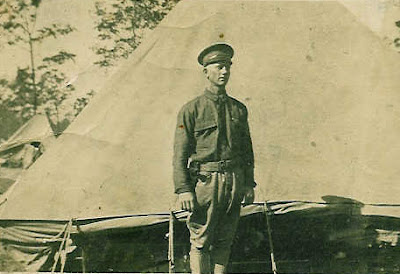 "Uncle Virgil Latham fought in World War I. He was gassed, and he got trench sores, and his feet and legs never did heal up right. He had them bandaged and had sores all over his legs. Uncle Virgil was in the Veteran’s Hospital more than he was at home. He would come out there and get out there on that farm and he’d try to plow. He had a pair of young mules and -- boy, I’m telling you -- they were big ol' mules! About 1,200 or 1,300 pound mules. There wasn’t nothing those mules wouldn't move. He bought himself a riding turning plow, where you could just go around and around and around with them and turn around when you got around to those bogs. He’d just ride all day, all he had to do was sit up there and hold the lines. Of course he could do that. But if you got out and started walking in that plowed ground, why those feet and legs they would just feel solid sore. It was what he called trench sores, or something like that. It was caused from standing in the mud as a soldier. That’s what caused it. And he also was deaf. He had problems with his lungs. In fact his lungs are what killed him. He’s buried in Cedartown, on the hill just above where the Central of Georgia railroad yards are. Just back west of there. That cemetery on your right, going from the Central of Georgia railroad through town, it’s there on your right." -- T.J. Latham