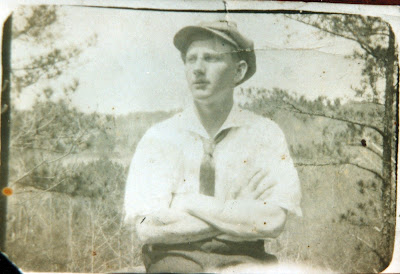 "My dad's younger brother was Virgil Latham. Uncle Virgil was very much into politics. He'd always have that newspaper spread out all over the floor. He was always, as quick as the mailman went by, he'd go to the mailbox and get his paper. And he'd spread that thing out all over the porch. He'd have it scattered everywhere. And he had a pair of those little bitty reading glasses, he'd have those things way down on his nose, there. He'd look over his glasses at you, up over the paper, in that way. He got passionate about the news. He had strong opinions. He got into fights a lot, with the Kirks especially. He had a temper.
"Virgil fought in World War I. He was gassed, and he got trench sores, and his feet and legs never did heal up right. He had them bandaged and had sores all over his legs. I think his time in the Army, as young as he was, did him more harm than anything. They taught him to kill. Not just to shoot, but to shoot to kill. And that never did leave him. Boy, I'm telling you, you just cross him, and he was ready to knock the top of your head off.
"Hoover, a Republican, was running against Democrat Al Smith for President. It was 1929 or so. Uncle Virgil and old man Elijah Rice got in a bet or quarrel or something or other. And they got into a fight over that election. And you know Uncle Virgil hated that man for the longest day he lived. And I couldn't find nothing wrong with Old Man Elijah Rice. He attended church. He raised his children right. I always thought a lot of Old Man Elijah Rice. I never had any problems with him. But Uncle Virgil couldn't speak to him without snapping him off. Looked like Uncle Virgil was saying, 'I'm daring you to say something to me to cause me to hit you.'
"Of course, it wasn't just Elijah Rice. He made a bet with somebody there in Buchanan about the election. He bet Al smith was going to beat Herbert Hoover. Uncle Virgil had a T-Model Ford. And I think he bet the Ford car against some amount of money. And when Al smith got beat, why, Uncle Virgil had to turn the car over, of course. There was a fight.
"Sheriff Richards said, 'You know, Virgil's going to get himself killed. He ain't got no sense. You can't argue with that man. You can't talk to him. If he says something you don't like, you'd better just forget about it - walk off and leave him. Otherwise, you'll get in a fight. Somebody's going to kill him.'
"But he is the one who managed to make it. He died a natural death. I don't know how he did." -- T.J. Latham
Be the first to the mailbox. Order A Cold Coming today.
Posted by W. Jeff Bishop at 7:30 PM