'The Lord Was Dealing With Me' 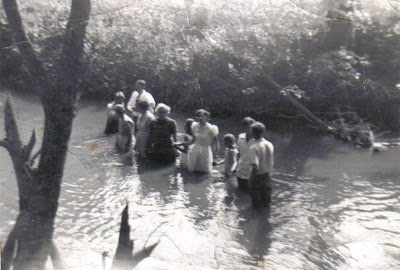 "I didn't go to church, no, not till I was, uh ... well, I was young, you know.
"When I was about 16 years old, 'bout it was 19 and 34, my first experience with the Lord came. Clarence Campbell was running a revival up there. That was about the time the whiskey was going on. Just after we’d quit. We was going up there to revival in August. Fourth week of August. I got under conviction.
"And that week, that Sunday, after the revival was over, they baptized 44 down there in the river. But I didn't baptize, because I'd decided I was about to turn loose the girl that I was with. She went to get baptized. I said, 'I'm not goin' because they'll say I went because she did.'
"But the Lord was dealing with me. And I knew it. But I didn't go.
"I was miserable. Real miserable, from then until January. God, there wasn't nothing going right. Wouldn't nothing suit me.
"So one morning I got up. I got to the place where I'd just mighta shoulda been dead as alive. Smothering again.
"So I told myself, 'Well, I'm going hunting this morning.' I went and got the gun. I took my old dog, a redbone / blue tick mix. We went down across the cotton patch. Went down across the creek. Went up there just about where we was making whiskey. Wasn't too far from it. Had my gun on my shoulder. Every time I'd look back, that old dog was right behind me. He was a good dog, too. A good hunter.
"I just got so heavy. I didn't know which way I was going, hardly. After a while, I come up to an old chestnut log. You don't see them now. Wasn't no bark or nothing on it. Just a plain white log. It was just as far as I could go.
"I says, 'I got to do something.'
"I set the old gun over the log and I kneeled down, and I began to call upon my God. And boy I tell you, there for a little while I just left this world.
"I got up. I looked to Red. That old dog was laying right there with me, just looking at me. So we went hunting. I killed two or three rabbits out there that day.
"But then I still didn't join the church. And that was a miserable life. I guess that was my worst life, from then until about the time right after I married. 16 to 21 years old. For those four years, I just couldn't get nothing to satisfy me.
"Meantime, I done a lot of drinking. A lot of running around. A lot of ever-thang." -- Carl Bishop
W. Jeff Bishop's new novel, A Cold Coming: 'A lot of ever-thang.'