'We Put Us Up a Run of Whiskey' 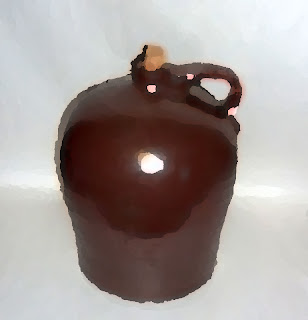 "One thing Daddy didn't find out about, not until later, was when we got started drinking, after we got on up a little in age.
"We slipped off over there across the creek quite a bit, me and my stepbrother Clarence did. Not too far from the house. And we got us a pot. Borrowed us a pot. And we put us up a run of whiskey. We got us up some corn meal and some sugar and stuff, and filled us up a run of it. We made one or two runs.
"Oh, we'd just take a bushel of meal, a peck of malt, an’ 40 pounds of sugar, and put in a barrel and let it work. And when it quit working we'd put it in a pot, boil it, and run out the whiskey!
"So one day we was headed off over there and it come up a real quick cloud. We'd just got the alcohol to running out -- it'd just started good -- and it come up a clap of lightning. It hit pretty close by there. Boy, ol’ Clarence, he jumped! He run up there and kicked the cap off of that thing! When he did, it just messed up everything. I come a-jerkin' the fire out from under it, and we took up to the house.
"So we got home and Uncle Joe Bishop was there. We didn't care if Uncle Joe known nothing. We told Uncle Joe what we'd done. Well, I told him what Clarence had done.
"He said, 'Well, we'll go back over there after a while. We'll slip off.'
"So after a while, after it quit raining and everything -- it didn't rain much -- we slipped off and went back over. He capped that thing back up. We’d lost about half of what we got. But we got some whiskey out of it." -- Carl Bishop

"That was just boys growing up back in those days. They didn't go to town. They'd just get together there at the river and have a chicken stew or something like that and get drunk." -- Denver Bishop