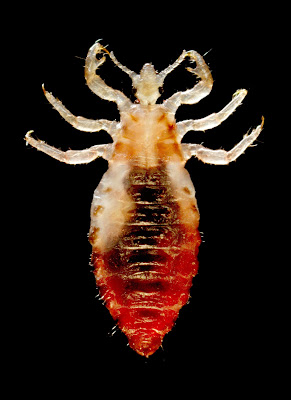 In the trenches of Europe during World War I, it was said, approximately 97% of the soldiers were infested with lice. Body lice (pediculus humanus humanus) were more endemic than either head or pubic lice in these trenches, as they thrived in the warm conditions the huddled layers of bodies and clothing provided. "Trench fever," or bartonella quintana, was commonly transmitted through louse-bite wounds awash with the feces of infected lice. Soldiers experienced a dangerously high, five-day fever, accompanied by searing pain anytime they moved their eyeballs. Soldiers also complained of sore muscles in their backs and legs.
A story circulated after the War that the body lice were commonly referred to as "chats" (true enough -- the Oxford English Dictionary affirms that "chat" has been used as a term for the body louse since at least 1690), and that our modern word "chatting" was coined in those European trenches to describe the activity of soldiers gathering in small groups to de-louse themselves. Hogwash. The term "chat" is derived from the word "chatter," and its origins extend all the way back to 1440, when a York mystery play enshrined the term in the line, "I charge you and your chiftan bat ze chatt for no chaunce." Furthermore, soldiers testified extensively to the fact that all attempts to rid themselves of the body lice were futile. Even when the lice were meticulously removed from the seams in the soldiers' uniforms in which they secreted themselves, their eggs would hatch by the hundreds the next day. The little buggers were, in other words, firmly entrenched.