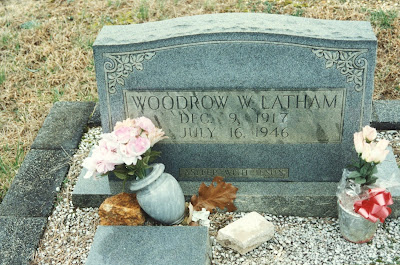 "Woodrow went after his daddy, Victor, who was my uncle, my daddy's brother. Woodrow Latham was a drunkard before he was 15 years old. And he would get dead drunk and he would come over to Uncle Paul’s house, Paul Jones, who lived on Eaves Bridge Road, and he’d beg Uncle Paul for a drink of whiskey. Now Uncle Paul always kept a jar of whiskey and I don’t know when he ever took a sip of it because I never smelled it on his breath as I knew of. And maybe his mother, my grandmother, Cora, would take a swallow sometimes. Well, I don’t know whether we, one of us, had told Woodrow that Uncle Paul had whiskey and he come by begging for a drink of Uncle Paul’s whiskey. And Uncle Paul wouldn’t even pay any attention to him. And he’d follow Uncle Paul around, up to the barn and about, and keep begging him until finally he’d go to sleep. Woodrow would crawl up under Uncle Paul's house and go to sleep. And Mr. Ayers lived just a little ways away from Uncle Paul. And he was a bailiff in the community. So Uncle Paul would go to Mr. Ayers and say, 'You’d better drag that boy out of there and take him and put him up until he sobers up.' And of course Uncle Victor appreciated that. Mr. Ayers would take him down to Buchanan and put him in jail. They’d charge him with disturbing the public, you know, and making such a show, a drunken guy. They’d charge him for it and make him serve time for it. But all they did, they’d take him over to Felton where they had a little hoose-gow over there. A little boarded-up place. And I think it belonged to a man by the name of Griffith. The county took it and made it where they could keep a guy that was drunk until he sobered up then turn him loose and let him go back home. O. B. Leatherwood was another one. O. B. Leatherwood got drunk and into a fight then crawled into a storm cellar out there just a little ways from Felton High, a farm cellar. They didn’t find him until they began to smell him. I remember that real well." -- T.J. Latham
Get drunk on A Cold Coming tonight. But maybe not that drunk.
Posted by W. Jeff Bishop at 7:10 AM