'As Pretty a Corpse as Any I've Looked At.' "Me and Etta had more fun together. When I moved off from Douglasville and she lived there we were just close. Me and her and our brother Will Shedd was closer together than anything ... We used to play together. Etta was four years older. Will was two years older than me. But we was the closest to each other. Will said when Etta died that he hoped he went on before any of the rest of his people went on, and he did. Two men beat him to death because he would not give them water from his well out there for them to use, wash and do everything else with it. They did. And I hate that.
"I couldn't even tell you everything I remember. I had a great mother and father, Nathaniel and Naomi Shedd. They raised us. They didn't let us ramble around like some people let their children. But they sure did raise us up. There was five of us girls and five boys, 10 of us kids. We was a family.
"You know Etta, Carl's mother, would always come to see me? Even when she was sick will pellagra. Well, the doctors called it pellagra, but to tell you the truth, Stella Thomas died of the same thing and they called it pellagra, but I believe both of them had cancer of the liver. Stella Thomas, I loved her like a sister. And she and Etta both showed me what was coming out of their bowels, and it looked like they were spilling a pot of blood.
"I'd make Etta go to bed when she visited me. She come to see me not too long before she died. But she was sick. And her car broke down and something went wrong with it. And I see her coming across there, kneeling by her baby, about as far as from here to that school house over yonder. So I took her on to the house and put her to bed. When we wanted to see one another, we were sisters, and if we wanted to bad enough we did what we had to do. We'd go and sleep with one another, in the same bed, when we'd visit.
"People don't do that now. People don't even go to see one another, anymore. They make every excuse they can. They'll go and see the sick when they get the time, they say. Meantime they're going off here, going off there, seeing places, other scenes. But the Lord calls us to wait on the sick and do for the sick. And if you don't do nothing for the Lord, you know what he's going to say? He's going to say, 'I was sick and you visited me none, I was in prison and you visited me none.' I can't remember it all like I used to could. But if we don't do that, he will say, 'Depart from me. I never knew you.' That's what he's going to say. And I'm afraid that's what he's going to tell everybody, because we have quit going to see one another, and we have quit looking after one another. No one comes to see me much. They run in, they run out. Your own people, in and out. Even your own children. They don't go to see me -- not like we did back then. Boy, I woulda had a fit if my mama had been living like I am! I live here all by myself, at 100 years old. Some people says, 'Ain't you scared?' I say, 'No, I ain't scared.' Treat everybody right, treat them all the same, and the Lord will look after.
"We would ride up in our wagon into my mama's yard. We'd always go up on a Saturday and see her and come back on Sunday evening. And she'd run up to the wagon and say, 'I believed you'd come today! I got up and did the washing. I knowed you would come wash my dishes!' It took us all day to travel to any of our brothers' and sisters' places. The wagon my daddy had, it only had one seat in it. And so we would all get in there and he would cover the wagon. We'd be gone all day long! Sometimes we'd start before daylight and it would be plumb dark before we got there. You knew them is sweet memories. Me and my daddy would go out at dogwood time and honeysuckle time and sweet shrub time and gather. We'd go around in the woods, him and us children, and gather up all the limbs and bring in loads of them. And we lived happy. 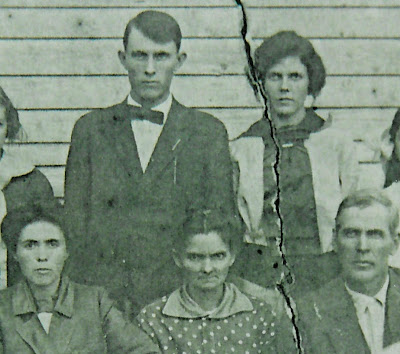 "I remember me and Etta playing with little dolls. We used to make rag dolls. We'd get out and play with them. They land was richer then than it is now. Broomstraw would grow as high as that lamp. We'd get out in the broomstraw patch and stay plumb warm. Play in the cold winter time ... until dark! I know we was gonna sleep in there because we was playing out there. We'd make a little house ... We went in that little broomstraw patch and we'd find that broomstraw and we'd make rooms, you know, from the broomstraw, on the ground. We'd make little houses. And in the summertime we'd make leaf dresses and hats. We got just eat up with redbugs! But we enjoyed that. We'd take some dry clothes with us and go to the creek. We'd make dresses out of flowers. There would be some of the prettiest butter flowers. You know they looked like leaves and were that big around, the blooms on them, and they were orange. We'd take honeysuckle vines and strip 'em and make baskets out of them, too. I made baskets for a pastime when we lived out there. I went out and I pulled them things. I'd get the as long as from here to the end of that, and I'd roll them up, around and around. You had to wash 'em. I took them things and put 'em in a wash pot, and boiled 'em. And then I poured 'em out and throwed them in a tub of cool water. I'd put them in a pile ad take them out and put them in a tub and put some water over them. And I'd just pick them up and pull back the little ones, get me a little roll about that big. It would take me a day. And I made baskets, sewed baskets. I made paper flowers, about that wide. And I made roses, and sweet peas. And, uh, I made paper all colors. I'd make all colors. Roses, carnations -- boy, they loved it. And them vines, them muscadine vines. I made them, it was in the flower book patterns. Them children would come see me and carry off a wagon load of baskets. I had one I made about that high that was to be a waste basket. It had a neck on it and it flared out. I carried Etta a bouquet of those flowers I made when she was sick. She ducked down and smelled one of them! Them roses looked so real. Them roses looked as pretty as any I ever seen.
"Etta died at my mother's house, with Ma and Dad and them. They had Oscar, Carl's daddy, to bring her over, and go back for a walk. We didn't have hospitals back then. She knowed she was dying. Her baby was just four months old. Etta gave birth at home to Naomi just before she died. She named her for our mother.
"Etta told me, 'Tela, you are the only one who knows. You are the only one that I can spend the night with. They can't come inside. Don't let them come inside.' And she was about as pretty a corpse as any I've looked at."
--Tela Shedd Whitlock. Listen here: just click.
Read more in W. Jeff Bishop's A Cold Coming -- February, 2013.
Posted by W. Jeff Bishop at 7:40 AM