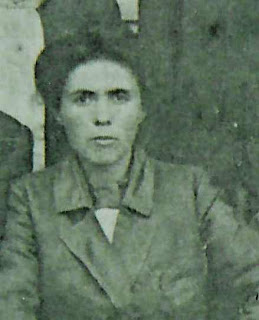 "I don't remember too much about her. I remember her being sick and I remember when she died.
"I remember some things that happened while Mama was a-livin'. Like when we were going from Douglasville up to Haralson County and having flat tires. It was a crazy thing. We had a flat tire one time and there was a big old buzzard sitting on the fence, right there on the pasture post. I thought that was the dangdest thing. Daddy went and thrown something at him that made him fly.
"See, Mama stayed sick for about three years. Doctor said it was pellagra. Of course, I don't know. It could’ve been cancer, far as I know. Back in them days, you know, they didn't know too much about diseases. Back in 1924.
"That's the year she died. I remember when Omi-Florence was born on the 14th day of March, 1924. We lived down there in Grandma's house. It snowed that night.
"Mama died that summer." -- Carl Bishop
A Cold Coming -- 'the dangdest thing' -- February, 2013.
Posted by W. Jeff Bishop at 7:50 AM