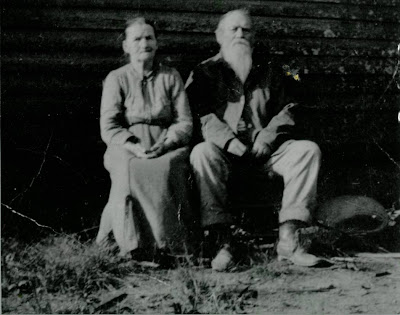 "Grandpa Latham (John 'Taz' Latham), when I knew him, had a long, white beard. It was like the top of my head, all over just as bald as a cue ball. He had a little bit of hair over his ear. But he had the prettiest beard, way down here, and moustache. And he loved sweetmilk and cornbread. He'd eat the sweetmilk and cornbread and you could hear him sucking all the way across the kitchen through that beard. And Birdie Latham, Uncle Victor's oldest girl, would stand by with him because Grandmother had fell and broke her hip, and she wasn't able to get around very much. Birdie had moved in with them after she'd finished school. Birdie always told Grandma he was 'sieving his squeamy milk,' like straining his milk through his beard.
"We'd go down there - we tended land out there on the river - and if we'd go to the house, he'd be sitting out on the porch, this big, heavy-set guy. He'd say, 'Is it bough?' I'd say, 'Bough? What do you mean? What you talkin' about?' But what he meant is, you know, 'Is the grass very high? The cuckleberries very high? Got a lot of weeds in it?' Stuff like that. But he used that old-timey word, 'bough.'
"He'd go out, sit on the porch, an' he'd say, 'Goin' out on the veranda now. Want to go with me?'
"Grandpa Latham was a farmer. He had a colored family on the farm that belonged to his father, when he moved down there from Tennessee. He built them that little house out there on the property, and they farmed for him. He raised horses, mules. And he bred two big old mares. He bred those mares every year and sold the new ones." -- T.J. Latham (Click here for audio.)
Read more about Grandpa Latham's fondness for cornbread and squeamy milk in W. Jeff Bishop's novel, A Cold Coming, available in February, 2013.