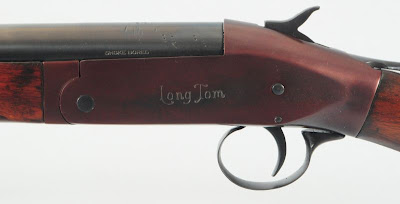 "Mr. John Eaves, he was a real good craftsman. He could make a gun stock that I mean was out of this world. He made me a gun stock. I had one of those old Long Toms, we called it. 12 gauge. I think it was a 32-inch barrel with a full choke. And you put that thing on your shoulder and try to shoot at a squirrel in a Poplar, you’d better get ready to get up because that thing would knock you down. And you didn’t have any padding for your shoulder, and your shoulder would be just as black as it could be. If you shot that thing-- Well, I don’t know how I did it, but I broke the stock, where the stock went onto the metal, I split it. The screws wouldn’t hold the stock. And it’d kick sideways. And, 'Oh my,' Mr. Eaves said, and this was after Dad died, he said, 'You don’t want to fool with that. You’ll get hurt. You just bring that thing down here and I’ll fix it for you.' And he always kept walnut, just regular dried walnut where he’d cut a chunk off of a walnut tree maybe, it would be a dead walnut tree, and he’d put it up in his shop. He had a real big shop down there. And he’d take that thing and chisel it and split it and cut it and kind of shape it and then he’d take and shake it and polish it, and then he’d just put clear varnish on it. Boy, I’m telling you that was a beauty. Oh, man. Everybody that saw that stock that he made for it said, 'Oh man, I’d like to get him to make me one.' And you know what he’d do? He’d get, it wasn’t foam, but it was some type of soft rubber, and he’d put two screws in it to hold that soft rubber on the back of that stock so it wouldn’t shock you." -- T.J. Latham