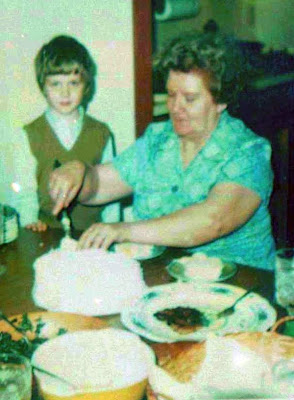 I never paid that much notice to my grandmother, if I’m being honest. I liked her cakes. I remember being concerned about her teeth. I was fascinated with all the old photos she kept in her bedroom. Once she hit me for saying something she didn't like. We didn't see her that often -- mostly on Christmas Eve and Mother's Day, with sporadic visits during the year to her little brick home in College Park on the Old National Highway. The most vivid recollection I have is of the day my father tried to take her with us to spend Christmas morning with our family at our home, which was about 45 minutes away. It had never occurred to me that I had never seen her, in all the years I had known her, outside of her tiny house. She had a mental disorder called agoraphobia, most likely, but she was never clinically diagnosed. There were other issues, as well. I vividly recall the day my dad and his brother and sisters tried to physically force her from the house. She was a large woman by that time, and she wedged herself in the doorway and fought them off with all the vigor she could muster, which was considerable, given her age. I remember she did not scream. She was eerily silent and intent, like those burly men you sometimes see in impromptu arm wrestling matches. Every time my dad made a little progress with getting her to the stairs, she would spot an opportunity to reclaim lost ground and make her way further inside. It was not a pretty sight. Finally when her breathing became labored my parents gave up and went home. In the car I asked the question, “What’s wrong with Grandma?” There was a long, uncomfortable silence.
Find out what was wrong with Grandma in W. Jeff Bishop's A Cold Coming -- February, 2013.
Posted by W. Jeff Bishop at 7:23 AM