'He Had To Go All The Way To Bremen' 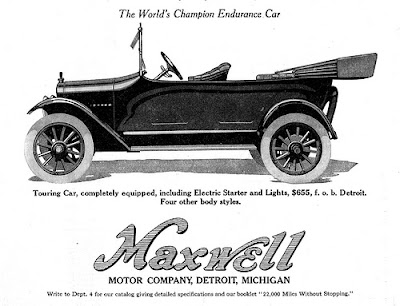 "The first car we had, then, was called a Maxwell. Dad had plowed up a new ground and he was going to plant turnips. And we had a drag - just two pieces of logs that were chained together. And Dad would pull that train out and put a single tree on it. And he had already put a harness on Grace, our mule, and we were just ready to start going out there to smooth that land over so we could sow it with turnips. And this guy from the car agency drove up in the car. Dad got in the car with him, and he had to go all the way to Bremen, because that's where the car agency was. Well, here Grace stood with this gear on her! Mother came out there and took care of Grace.
"When he came back after dark he'd run off the road and bent the left rear fender up against the wheel. And it was one of those old 30 x 3 1/2 clincher-type wheels - big, wooden wheels.
"It was different from the cars you see today. The transmission was on the rear axle. He could turn the top back - it had a white, canvas top on it. It was a touring car, you know." -- T.J. Latham
Read more about the Latham family's Maxwell touring car in W. Jeff Bishop's A Cold Coming -- February, 2013!