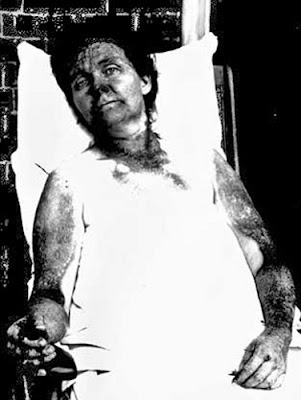 Pellagra (pronounced variously in the Deep South as po-log-gurry or pee-lag-gurry) is caused by malnutrition, and is almost non-existent in developed countries in the 21st century. The root cause is a deficiency of niacin, usually because of an over-dependence on corn, which is a poor source of niacin (the disease can also be caused by a lack of tryptophan, an amino acid found in chicken and beef, fish, and eggs, but not in corn). In early 20th century rural America, especially among the tenant farmers and mill workers of the Deep South, corn was a staple food. Corn had been the primary food source of Native Americans all over the New World for centuries, but many of them had "nixtamalized" the corn through soaking it in lime, an alkali, which made niacin available. When whites took the land in Georgia from the Creeks and the Cherokees, they also adopted corn as their staple food, but did not understand Indian traditional food preparation. Symptoms of pellagra -- sunlight sensitivity, dermatitis, alopecia, edema, skin lesions, weakness, confusion, dementia, aggression, diarrhea -- were worse in the summer. Since men and children often were given preferential access to food, more than twice as many women came down with pellagra than men. By the teens and 1920s pellagra had become an epidemic in the Deep South, affecting hundreds of thousands of people. Scientists at the time thought pellagra was caused by a hidden germ in corn. One doctor, Joseph Goldberger, understood the underlying dietary causes of pellagra as early as 1915, when tens of thousands were still dying from the disease each year, but medical professionals did not begin to take his theory seriously until over a decade later.
Left untreated, pellagra usually kills its victims within four years.
(This information is mostly ripped off from here.)