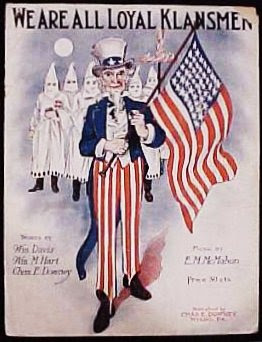 At the the apex of the second Ku Klux Klan’s political power in the mid-1920s, as many as 5 million Americans claimed membership. Some accounts held that one in four white Protestant men were members.

According to the Klansman's Manual of 1925:


"The Knights of the Ku Klux Klan is a movement devoting itself to the needed task of developing a genuine spirit of American patriotism. Klansmen are to be examples of pure patriotism. They are to organize the patriotic sentiment of native-born white, Protestant Americans for the defense of distinctively American institutions. Klansmen are dedicated to the principle that America shall be made American through the promulgation of American doctrines, the dissemination of American ideals, the creation of wholesome American sentiment, the preservation of American institutions...
"The supreme pattern for all true Klansmen is their Criterion of Character, Jesus Christ, 'who went about doing good.' The movement accepts the full Christian program of unselfish helpfulness, and will seek to carry it on in the manner commanded by the one Master of Men, Christ Jesus...
"American Interests: To protect and defend the Constitution of the United States of America, and all laws passed in conformity thereto, and to protect the states and the people thereof from all invasion of their right from any source whatsoever."

By 1930 their numbers had dropped precipitously, to somewhere around 30,000.
Read more about Pure Patriotism and defense of the U.S. Constitution in A Cold Coming.
Posted by W. Jeff Bishop at 9:07 PM