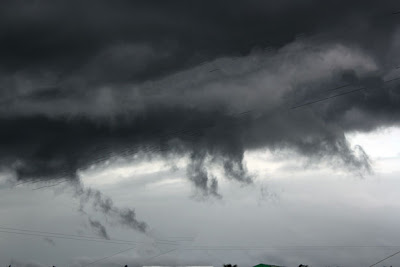 A Number of Bridges Washed Away!

On last Monday morning, about the time of business men of our quiet little town were just beginning their daily avocations, and the farmer's usual voice could be heard resounding from hill to hill, a dark cloud was seen rising in the south, and soon the elements became so dark that many had to light their lamps in their respective places of business.
The clouds seemed to grow darker. Some of the merchants closed their stores and went to their residences, while others were watching every movement of the cloud, thinking that any moment a great cyclone would bust upon the town.
Soon it was seen that the volume of blackness was not a cyclone, but a great rain. Rain commenced falling about 9 o'clock and continued falling very fast for nearly an hour. It discontinued to rain, and all thought that it was over.
But late in the afternoon, dark clouds could be seen rising in the south, and occasionally an electric flash. The clouds seemed to be coming from every direction. All thought a great wind storm would surely come. So they prepared to go into their storm pits. Those who were so unfortunate as to have no pit and who laughed at the idea of digging a pit were soon going to spend the night at their neighbors who had one.
About 9 o'clock the storm begun. It was not a storm of wind, but one of the heaviest rains that was ever known to fall in this county. With the exception of short intervals, the rain fell from 9 p.m. until nearly 2 a.m.
Tuesday morning came, and occasionally a man from the country would come to town and relate the great damage done to his land.
The rains resulted in a mighty ocean of water. It seemed for a time that the great Mississippi had a rival. The river was fully half a mile wide, and bridges were floating on top of the water. The damage was greater than ever known before. The river was five feet higher than it had been in 20 years.
John T. and Robert D. Latham's farms are washed away. Mssrs. Thomas S. Latham, Joshiah Chambers and others were greatly damaged.
Latham's Bridge on the river was wrecked.
Get flooded in W. Jeff Bishop's novel, A Cold Coming -- February, 2013.
Posted by W. Jeff Bishop at 6:10 AM